State League Division Two side Gosnells City sprung the surprise of the weekend in Round Five of the FFA Cup's WA preliminary rounds as they eliminated NPL side Rockingham City 2-1 on Sunday.

Both sides have collected just one win each in the league this season, but it was visitors Gosnells who showed no fear of their higher-ranked opponents as Scott Pereira opened the scoring from the penalty spot.

Gosnells, State Cup winners back in 1982, then had one foot in the next round of the competition when Brice Rae made it 2-0.

Dylan Rogers pulled one back for the home side late on, but it was Gosnells' day as Marc Anthony's side recorded a famous win against a team 23 places higher than them in the league.

The most impressive result of the day came at Kingsway Reserve after a first half onslaught helped ECU Joondalup secure their place in the next round with an 8-0 win at Olympic Kingsway.

Former ECU assistant coach David Tough was in the opposition dugout having recently taken the Kingsway hotseat, but the hosts were blown away by three goals in the opening 14 minutes from Daryl Nicol, Danny Hodgson and Chris Harold.

Kenny Lowe's side did not let up in the second half as Nicol added a second before Jason Petrie and Declan Hughes scored to complete the rout.

There was no upset at Dorrien Gardens either as three-time NPL champions Perth Soccer Club defeated Kwinana United 2-0.

It was a gutsy effort from the second-place Amateur Premier League side who are three divisions below Perth in the pyramid, but the Azzurri advanced as youngster Federico Achilli netted a pair of goals on his first senior start.

Elsewhere, NPL sides Sorrento and Cockburn City edged past lower league opposition to book their spots in round six.

Cockburn were pushed all the way by Division One Mandurah City as Jesse Lazzaro's extra-time goal proved to be the winner, while an early goal from Tristan Steven ensured the Gulls got the job done against Division Two side Carramar Shamrock Rovers.

Meanwhile, NPLWA league leaders Floreat Athena booked their spot in the last eight as they defeated Gwelup Croatia 3-0 in one of two all-top flight clashes at the Croatian Sporting Complex.

Gwelup were the first team to take points off Athena in the league a fortnight ago, but the visitors were far too strong at the Croatian Sporting Complex with Rob Harding netting a hat-trick. 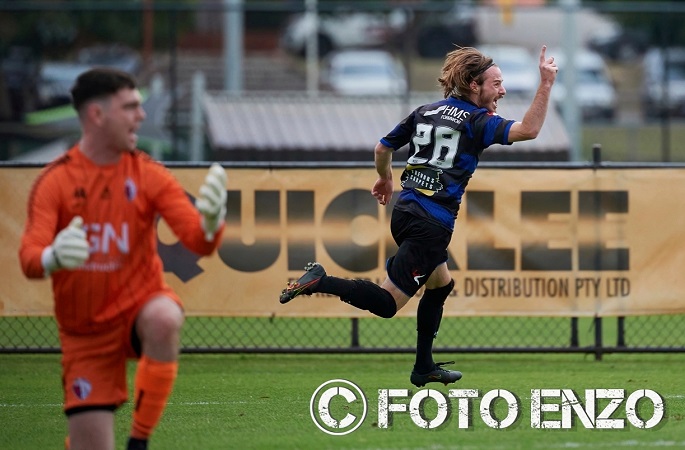 Kosta Sparta celebrates his goal for Bayswater against Balcatta in the FFA Cup. Photo by FotoEnzo

The other fixture between two NPL sides saw Bayswater cruise past Balcatta 4-0 at Frank Drago Reserve.

Balcatta won March's league meeting 3-2 at Grindleford Reserve, but Gareth Naven's side claimed a piece of revenge with Gordon Smith opening the scoring in the first half.

It was a one goal lead at the interval, but Bayswater went on to record a confidence boosting win after the break as Gomo Dukuly, Kosta Sparta and Fraser Dunlop netted second half goals.

One tie from the local round of 16 remains as last season's Belt Up Amateur Premier League winners North Perth United face NPL side Armadale this Wednesday night (7pm kick-off).